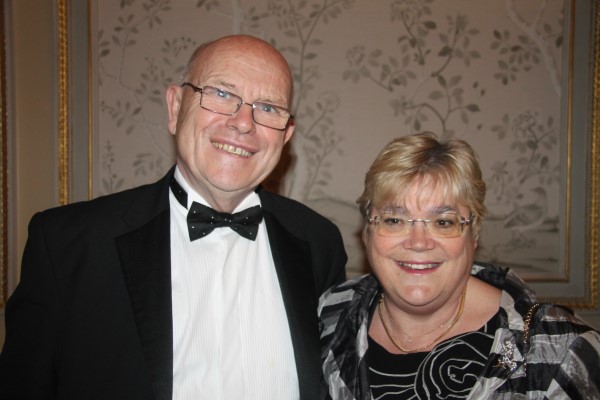 Nearly one hundred Old Priorians and their guests assembled at the Lansdowne Club on Thursday 21st April 2016 for the Old Priorian Association’s President’s Dinner. The Guests of Honour were Chris and Tina Cleugh in a fitting celebration of Chris’ Headship of St Benedict’s School from January 2002 to August 2016.

Chris and Tina have been associated with St Benedict’s, Ealing for the last fourteen years. During that time the Old Priorian Association could not have had greater support from Chris, both as Headmaster and a valuable member of the Council of the Association. Tina too has always shown the greatest interest in all that we do, attending so many of our functions, both the formal ones and the informal. We wish them both every blessing and contentment in their retirement – we shall miss them greatly.

After the Loyal Toast, special this evening on account of The Queen’s ninetieth birthday, the OPA President, Lewis Hill (OP 1975), gave his address, welcoming “new faces”, especially the Headmaster designate – Andrew Johnson and his wife Dawn, Catherine Bedwin, the new Bursar at St Benedict’s School, the Head Boy – Francis Curran and the Head Girl – Siofra Boyle. In summing up he made special mention of those retiring members of the OPA Council who had served the Association so willingly and effectively: Chris Cleugh, so faithfully supported by Tina, Marek Nalewajko, Tamlyn Worrall and Catherine de Cintra; he finished by toasting “The School”.

Headmaster Chris Cleugh then gave a most entertaining and moving speech: “Fourteen Years …” picking out some of the highlights from his years of faithful stewardship of the school.

After many years at the Royal Overseas League, the Lansdowne Club provided a wonderful new venue for this annual dinner, with the Banqueting Hall marvellously decorated for the occasion.

Two different sets of pictures from the occasion can be viewed at:

If you have problems viewing these pictures, please select one of the options given on the error page

The photographs for this Dinner, as at so many of our functions over the past years were taken by our “Official Photographer”, Marek Nalewajko, Marketing Director of St Benedict’s School. Marek retires this summer after 39 years at St Benedict’s, starting as a junior Maths teacher in 1977 and becoming Head of Mathematics for 10 years from 1993; before that he was Lower Sixth Division Master between 1983 and 1993. He took up the post of Marketing Director in 2006, initially still teaching some Maths, and from 2008 has been doing marketing full-time. We thank him for all his hard work for the Association in so many fields and wish him a very happy and peaceful retirement.